1) Each team will play in doubles matches based on 21 points system.

2) Each team will play in round robin against other teams within their respective group for 1 game each. Each team will therefore play at least 3 games in their group. The order/schedule of play is provided below.

3) Each team will be ranked 1st to 4th in their group based on the number of games won out of the 3 games played. 2 teams ranked 1st and 2nd of their group will proceed to the Semi-Final (knock-out stage).

In the event of ties, the ranking will be determined based on net points won i.e. total points scored, net of points against. In an unlikely event of another ties, a tie break of 5 points will be played between the teams to determine their group ranking.

4) 2 teams ranked 1st and 2nd of their group will play in the Semi-Final as follows:

5) The winners of the Semi-Final will play against each other in the Final to determine the eventual Champion and Runner-up.

6) Please arrive on time at 10.00 am. All matches will be completed within the court time. In the event of early finish, court time will be used for usual badminton sessions.

7) This is a social event and we are a group of individuals getting together to play badminton for fun. Refer to our standard terms provided in FAQs. Please respect your fellow partner and other teams and not to cause any individual injury or racquet damage while playing badminton.

Prizes:
Winners and Runners-up will receive trophies as token of achievement. 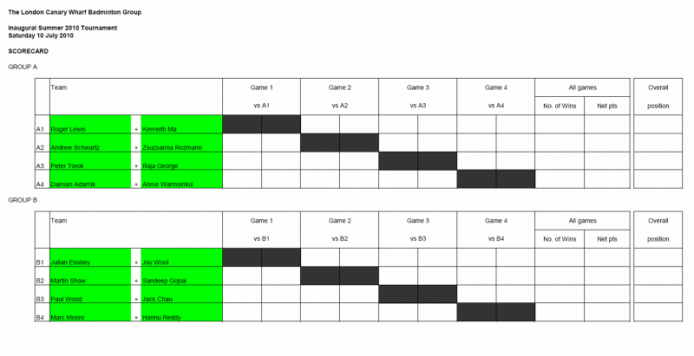